Where do you imagine rattlesnakes living?
Did you think of a hot desert… You wouldn’t be wrong! However, did you think of your own backyard? That’s right, Ontario’s only species of venomous snake lives right here, in the biosphere!
Say hello to the Massasauga rattlesnake! Even though having a rattlesnake in the biosphere might sound scary at first, Massasauga rattlesnakes are shy, quiet snakes that mostly want to be left alone. They’re more afraid of you than you are of them! They are also a Threatened species, meaning that they are in danger of becoming endangered. There are three keys to living in harmony with the Massasauga rattlesnake:

If you can identify thee Massasauga rattlesnake, know how to help protect our species at risk, and be safe in rattlesnake country, you’ll be a Biosphere superstar!

To start off, we need to be able to tell what a Massasauga looks like. Here’s a guide! Now that we know what they look like, it’s important to know where Massasauga rattlesnakes live.
Massasauga rattlesnakes are called ‘habitat generalists’ which means they can be found in different habitats within the Biosphere. They tend to stay near the water, and especially like lowland habitat with rocky patches and low bushes, such as blueberry and juniper. Make sure that when you’re exploring, you’re respectful of the habitats these shy snakes live in! Here are a few tips for being safe: 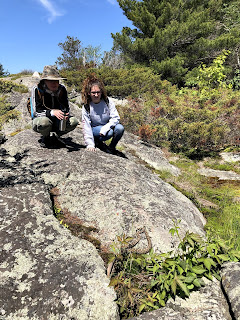 If a bite does happen, don’t panic! Massasaugas only bite as a last resort, and about a quarter of all bites are ‘dry’, meaning they don’t even have venom. If you or someone you know is bitten, make sure that they go to a hospital immediately – you can never be too careful!