Beavers are a favourite Canadian icon, we even have them on the nickel! Beavers love water, and while they are slow moving on land they are super fast in water and can even hold their breath for up to 15 minutes!

Did you know that in Ojibwe the beaver is called “Amik”?

Beavers are well known for their large teeth and flattened tail…but they are also known for their amazing ability to be an ecosystem engineer! What is an ecosystem engineer? It is a species that is able to change or maintain the habitat they are living in.
A beaver’s dam is made out of logs, sticks, stones, and mud. The beaver chews down trees with their strong front teeth; these teeth grow continuously throughout their lives. Contrary to popular belief, beavers do not carry mud using their tails, they actually carry mud in their front paws and holding it against their furry chests. The dams hold back water, as they often are blocking the flow of a river, creating a pond or wetland. Adding a single dam to a river can drastically change what the upstream and downstream area looks like! 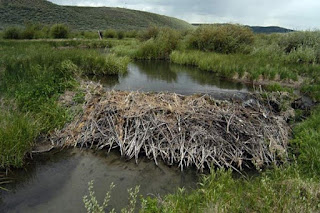 Why do beavers build them? So that they have a place to build a safe lodge to live and raise their families! The lodges need to have underwater entrances to avoid predators which is why the beaver dams a river to make a pond. The ponds and wetlands they create also make habitat for other animals too, this is why beavers are known as ecosystem engineers.
Other species that are benefited by beavers are water birds, frogs, turtles, and some fish. Beaver dams are also very helpful in dry areas as they can help to reduce the severity and effects of drought. 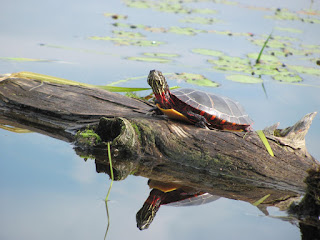 Many woodpeckers use their nesting trees for only one year, and then these holes are used by a number of other species such as: bluebirds, black-capped chickadees, wrens, and even some bats! 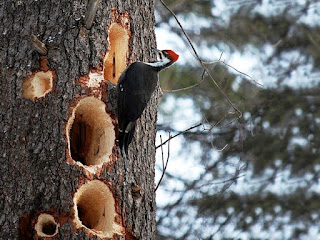 Having helpful species like beavers and woodpeckers in the Georgian Bay Biosphere is important for the other species that live here too. You can help out local wildlife species and ecosystem engineers by planting native plants in your gardens, cleaning up litter, keeping pet cats indoors, and recycling!
Three cheers for ecosystem engineers and white tailed deer!
Posted on August 7, 2018