Do you ever see spiders and think “ew“?

I used to too, but that was before I realized how cool spiders are!

Since many spiders don’t have the best eyesight, they often use their “spidey senses” to locate their prey!  What are these “spidey senses“? They are vibrations that spiders can feel through the strands in their web. 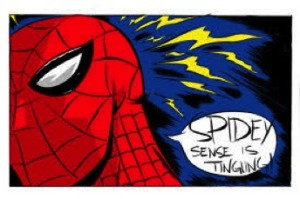 Spiders have different types of webs depending on how they catch their prey!  The most common that we see are the circular webs.  These are very sticky and capture insects instantly when they touch the web. Once the insect lands on the web, their movements pull on the strands of web alerting the spider to where the insect is!

If the insect is large, or if something else hits it such as a bird, the web can become damaged.  Some spiders will repair the web, while others will create an entire new one overnight!

While walking through a meadow for forest you may have seen a sheet-like web.  This web is spun horizontally across the ground with a few strands of web being vertical. The more vertical lines are not sticky and meant to knock insects downwards onto the more sticky ground web.  The spider then will be able to “feel” its way towards the trapped insect.

A third type of web is called a funnel web. Just like a funnel you’d have in your kitchen, these webs are wider at the top and narrower as they go down.  Once a spider feels that an insect is on the top of the web, through the vibrations in the strands, it will pop out of its narrow hiding place and capture the pray on the web.

Unlike Spiderman, spiders don’t shoot out webbing out of their arms, nor do spriders swing from building to building using webbing. Instead, this webbing is used for web-making and for wrapping their prey.  Once an insect is caught, a spider will wrap its catch in silk (similar to their webbing). They will then injecting their prey with venom to paralyze it and then eat it!

Spiders help to keep our yards and homes free from insects that we might consider to be pests. Take a look around your cottage or home right now, do you see a friendly neighbourhood spider? Has it caught any insects today?  Watch a insect fly into its web and see how the spider reacts, it’s pretty cool!  Make sure when you see an insect in a spider web to check it off your 2017 Great Scavenger Hunt list!
Three cheers for friendly spiders and bright birds!
Posted on August 15, 2017