Have you started the “Bugs in the Belly” activity yet?  At the GBBR, we think bats are awesome, but but many people are confused by the myths surrounding bats.

Myths are widely held beliefs that often explain something in the natural world. Another word for myth is: tale, legend, folklore or story. Let’s take a look at some bat myths and see which are true and which are false. 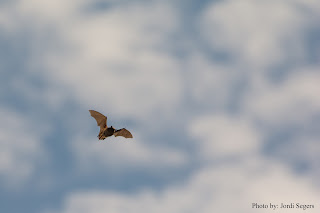 Have you ever heard the phrase “you’re as blind as a bat”?  It’s a funny because bats are not blind!  In fact, that can “see” better than humans can due to the fact that they use both their eyes and a highly developed sense called echolocation. Echolocation is a series of extremely high frequency chips, produced by the bat and emitted as sound waves, that bounce off objects and prey (insects).  When bounced, these sound waves then return to the bat, helping it navigate and hunt.

Bats sometimes will swoop around your head as they are hunting for insects to eat.  Don’t worry though, their use of echolocation will prevent them from actually landing on your head.  Think of them as protecting you from biting insects!

While bats do indeed fly, but unlike birds, most bats cannot fly straight from the ground. Bats instead need to be off the ground in order gain enough momentum to fly.  So if you find a bat indoors, what should you do? If it is on the floor, the best thing is to find a towel and allow the bat to slowly climb onto it.  Most objects in our homes are smooth and so it is difficult for bats to maneuver on them, but a towel is textured.  Once it is on, carefully walk the towel outside and place it near a tree for the bat to climb up.

Myth #4:  I can contract lung disease from bat guano  (True)

Guano, is another word bat scat, droppings or poop!  Histoplasmosis is a fungal disease that can be contracted if you are in an area where you may breathe in fungal spores found in areas with these bat droppings. If you are working in an area where bats are roosting (like an attic) you will want to wear a suitable respirator mask.

Myth #5:  I can contract rabies from bats (True)

Rabies is a disease that is spread through coming in contact with the saliva of an infected animal, usually in the form of a bite. Luckily, less than 1% of bats have rabies, but it is still important to protect yourself. If you come in contact with a bat (for example to remove it from your home) there are a few things you can do: wear leather gloves; wear a long sleeved shirt; take the bat outside using a towel or container that you can leave at the base of the tree for it to climb.

Have you been watching vampire movies?  Bats are wonderful creatures and, in some parts of the world, have been known to share food with other bats! The biggest enemies to a bat is habitat loss and white-nosed syndrome.  There are many things you can do to help bats: 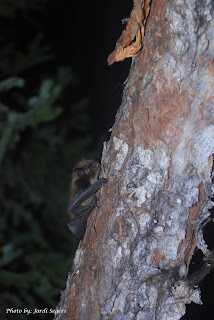